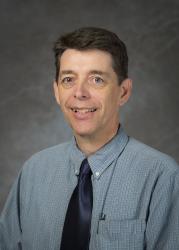 Dr. Robert Psurny is a native of Northwest Ohio, and began his vocal studies with Professor Barbara Rondelli at the University of Toledo, where he earned his Bachelor of Music degree. He continued his musical studies at Ohio University (Athens) where he earned a Master of Music degree in Vocal Performance and Music Theory as a voice student of Dr. Ira Zook. Dr. Psurny earned his Doctor of Musical Arts degree from the Cleveland Institute of Music and Case Western Reserve University as a vocal student of Irvin Bushman.
​
He has performed as a vocal soloist and chorus member with The Robert Page Cleveland Singers, Apollo's Fire (Cleveland's Baroque Orchestra), Musikanten Montana, The Cantabile Men's Ensemble (West Virginia), Cleveland Opera Chorus, the Cleveland Bach and Handel Society, and numerous churches and synagogues. He is an avid recitalist, specializing in performances of complete song cycles by Schubert, Schumann, Beethoven, Mahler, Fauré, Poulenc, Satie, Dvorak, and others.  In Spring of 2015, Dr. Psurny was a Fulbright Scholar to the Czech Republic, where he studied Czech language and Czech choral music at the Academy of Performing Arts in Prague (AMU).

Dr. Psurny has conducted such choral works as the Mozart Requiem, Handel's Messiah, Haydn's Creation and Lord Nelson Mass, Bach's Magnificat, and many others. He has formerly held positions on the music theory and voice faculties of the Cleveland Institute of Music, Baldwin-Wallace College, Davis and Elkins College, and Carroll College.

​When not taking part in musical activities, Dr. Psurny is most often found outdoors, either running or hiking on trails around Sheridan, riding his road bike, or falling off his mountain bike.